When you look at the Mondi Syktyvkar pulp and paper mill today, it is hard to imagine its origins in 1969 Russia, twenty years before the fall of the Berlin wall.

“Over the past fifty years our mill has undergone a profound transformation”, says Klaus Peller, Mondi Syktyvkar Managing Director.

Today, the production site is not only one of the largest in the entire Mondi Group; it is a modern industry powerhouse, a leader in production as well as sustainability, and the employer of choice in the Komi region of Russia, which is the size of Spain with a population of 830,000.

A mill that powers an entire region

Around 4,700 people work at the mill, and its annual production reached 1.2 million tonnes of office, offset and newsprint paper, containerboard and market pulp in 2018. Most Russians will know the office paper Snegurochka, which is produced here, and recently received a brand refresh. Mondi Syktyvkar is a fully integrated pulp and paper mill operating three uncoated fine paper machines, one containerboard machine and a pulp dryer, as well as a wood yard, a pulp mill, a power plant and a waste water treatment plant. So Mondi Syktyvkar is almost a small town in itself.

The mill plays a vital role for the communities of the Komi Region. Its waste water treatment plant processes over 80 million cubic meters of water annually, including 100 % of municipal wastewater from Syktyvkar, the Ezhva district, and neighboring industrial companies. Its power plant not only powers the mill, but covers around 20 percent of the regional demand in electricity, and it is the only source of heat and warm water for Ezhva district of Syktyvkar with a population of around 60,000 people, which matters when temperatures range between –35°C in winter to +30°C in the summer.

Mondi Syktyvkar covers the entire supply chain from wood to paper and takes special care to design all processes in a sustainable way. It partners on environmental initiatives with WWF Russia and cooperates with the Silver Taiga Foundation for Sustainable Development to preserve biodiversity of boreal forests for future generations. The forest management and wood supply chain of the mill are certified in accordance with the standards of the Forest Stewardship Council® FSC-C 119916, as well as PEFC and ISO 14001.

This means for instance that 12% of all forest areas have to be conserved under the forest management plan. Mondi Syktyvkar goes one step further by leaving another 12% of the territory untouched. In its own forest nursery, the company plants more than 8 million containerised seedlings of pine and spruce per year, as part of its contribution to reforestation activities of the Komi Republic and neighbouring regions. 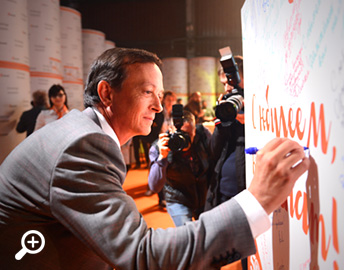 Clearly, there are plenty of reasons to celebrate. That is why June 2019 was dedicated to the 50 year mill anniversary in and around Syktyvkar. On 6 June a photo exhibition dedicated to the past and present achievements of the mill opened in a shopping center. The visitors also had the chance to take a virtual tour of Mondi Syktyvkar with an augmented reality app.

Around 250 special guests were invited to celebrate the mill’s anniversary on 25 June: representatives of federal and local authorities, environmental and financial organizations, international and Russian customers, partners, journalists and Mondi top management. Among the participants are Peter Oswald, CEO of Mondi Group, Evgeny Ryzhov, Department Head of Ministry for Industry and Trade of the Russian Federation, Klaus Peller, Managing Director of Mondi Syktyvkar, Mikhail Poryadin, Deputy Chairman of the Komi Government, Nikolay Shmatkov, CEO of FSC Russia, Vladimir Chuikov, Chairman of the Board of Directors of GOTEK Group and Denis Zhuravlyov, Chairman of the Trade Union of Russian forest industry. Mondi

The main stars of the show, however, are Mondi’s employees. On 27 June, Oleg Pogudin, a famous romance singer and a People’s artist of Russia, performed for former employees, and two days later, Syktyvkar Central stadium hosted an Anniversary gala concert for Mondi Syktyvkar employees and their families featuring Russian popstars Dima Bilan and Yulianna Karaulova. The celebration concluded with a beautiful fireworks display.

I’m very proud of the success story that is Mondi Syktyvkar, their performance, their focus on sustainable development and responsibility towards the environment, and their excellent team. My deepest congratulations to all of the employees. I am looking forward to the next 50 years.